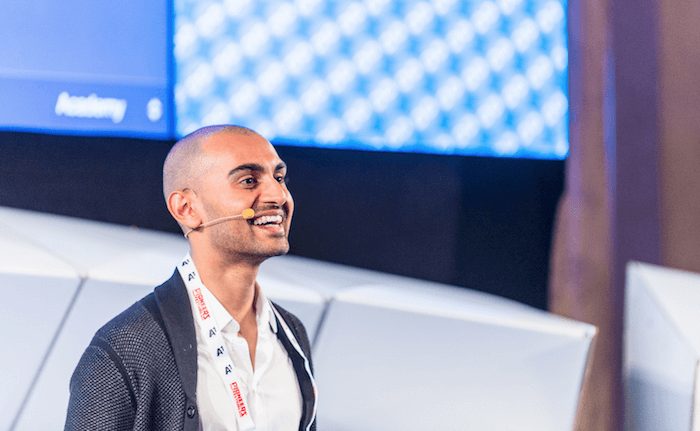 Neil Patel, the co-founder of KISSmetrics and CrazyEgg, is a New York Times bestselling author lauded as one of the world’s top marketers and entrepreneurs.

Currently, his blog has several million visitors per month and he hosts a podcast with Eric Siu, entrepreneur and marketer, called “Marketing School”, which teaches marketing advice daily to over 1 million people per month around the world.

I interviewed Neil to discuss his journey, life lessons, ups and downs, and best advice for anyone — regardless of where they’re at now — to accomplish their entrepreneurial goals.

At first, what was your motivation and how has that evolved over time?

“When I just started out, all I cared for was money.

I wanted to build a business so I could buy a nice house, a nice car, etc.

Over the years, I realize a lot of those things don’t make me happy and that money is a side effect of building a good business.

Now I just want to build a business to help others.

It’s also like a game; it’s like a scoreboard. And the beautiful thing about business is it’s a game that never ends.

Did your motivations changed quickly or was it a gradual process?

“It was a gradual process. It took years because I realized a lot of the stuff doesn’t make me happy, yet that’s what I was working for.

And I was just like, “You know what? I enjoy what I’m doing, might as well have fun, and not worry about the money.”

Granted, you have to make sure your business keeps produces more money.

But what I mean about “not worrying about money” is, from a personal aspect, don’t worry about “how rich am I going to be” or “how much money am I personally going to take home each year.”

Just focus on the business.”

Did you face much criticism or negativity as you were starting?

“There really weren’t too many critics.

A lot of people actually embraced me, they tried to help me out, they took me under their wing — so I really didn’t have too much negativity about me being young, etc.

They were like, “Good job! Keep at it! Times are tough and you might not be doing as well as you want, but if you keep at it for 10 years, you’ll do extremely well.”

Who do you spend time with?

For me, the biggest thing in the world and the biggest reward is education. I think it’s actually priceless.

So I make sure whoever I hang out with are smart. It doesn’t mean that they have to be rich; it could be that they’re a teacher or don’t have a college degree and do something like paint.

How do you pick teammates?

“You want teammates that you get along with and that bring something to the table that you don’t bring.

You also want teammates that just move fast, that are hungry, that know what they’re doing, etc.

It’s kind of like marriage: If you’re going to pick someone — partners, especially — you better pick partners that you really get along with, that bring value to the table, and that have their interests aligned with yours.”

What are the top things you think about when helping someone grow their business?

“One of the most important things I think about is:

What’s the quickest way to grow the business? What’s the lowest hanging fruit?

Is it SEO, is it conversion optimization, is it paid advertising, etc.? I don’t always know the exact answers, but I always have to dig in there and find out what are they not doing or what they doing that could be improved upon with least amount of effort.

Because if you can speed up the growth rate of a business, the valuation of the business goes up.

I’m a big believer that it’s all about “quick wins.”

How can you keep making a lot of small changes that are wins? Because eventually, it adds up to big wins.

There’s no one big thing that a company can usually change to affect the trajectory of a business; it’s usually a lot of little things that add up.”

What are the most common mistakes you see with companies trying to grow their business?

Sometimes it’s pricing models, sometimes the sales team isn’t fine-tuned, sometimes there’s something wrong with the code that’s affecting SEO traffic, or maybe they’re not converting a lot of visitors into customers and so they need to focus on conversion optimization.

And if you take the CRO angle, you’re not going to do one test and actually double or triple the conversions. (It may happen, but it’s rare.)

You’re usually going to have to run 10, 20, 50 tests before you get some really big wins and see a huge difference.”

A lot of people don’t know this, but when you were in high school, you went door-to-door selling vacuum cleaners. Some might feel they can’t do something like that. What were some of the lessons you learned?

“That’s where I learned how to sell; you just knock and learn.

I think that’s a big problem with a lot of entrepreneurs out there: They think too much instead of just going and doing.

Don’t get me wrong, thinking is valuable.

But sometimes, when you’re just trying to learn stuff, just go out there and do it.

Yeah, you might make mistakes, yeah you might lose some money, but who cares? You’re learning along the way.”

What were some life experiences that really helped you put the throttle on your growth?

I never grew up with money. During those early days, that’s all I wanted so I did whatever it took, assuming I wasn’t breaking the law or doing anything unethical.

When you want something so bad, sometimes you’re willing to do almost anything for it.”

Talk to us about your experiences with lifestyle marketing.

“Over the years, I found out that perception is reality.

If someone thinks you’re rich, then in their eyes, you’re rich; if you don’t look rich to someone, then you’re broke.

Now, by no means is that important. I never value people based on how much money they have or how they look, etc.

My mom was a teacher. And I remember her first job, she walked with my sister to school miles each way and taught for free until they gave her a job that paid money.

For me, what matters is how good of a person you are and how smart you are.

I started doing TV and media appearances and you have to look nice and actually get a proper suit.

So I thought, “Well, if I’m going to spend money on a suit for business, I might as well spend extra to get one that looks better, not in my eyes, but in the eyes of person picking the suit or the PR person.”

I noticed as I started dressing better and better, I started getting more business deals. I wasn’t doing anything that changed, it was just the people on the other side who thought I was more successful and they wanted to work with me more. For those reasons, I started to dress nicer.

Now, I don’t care what I wear. If we had the camera on me, you would see that I’m wearing a dot.com T-shirt and basketball shorts. If I had my choice, I would wear that every single day because it’s comfortable.

But I learned is what other people feel is sometimes their reality and sometimes you have to go into their beliefs to make money.

And it really sucks, but it’s the truth, right? What can you do?

And my only goal is to grow the business because, if I can and we make some more profit, then great, the business does better, I can take care of the team members who helped get us there, pay them more, give them bigger bonuses — whatever it may be.

Sometimes it kind of sucks, but I just play into it which is the reality.

If you’re going to go on this journey, don’t just spend money because you want to be cool or successful.

Do it to learn.

You don’t really need a fancy car or anything like it — it won’t do you much.

But if, for example, you can rent a place in a nicer neighborhood, you actually learn more because your neighbors are probably successful, they’ve experienced more in business, especially if you’re trying to get into entrepreneurship, and they could probably teach you a thing or two.”

What would you tell entrepreneurs to do RIGHT NOW to make their dreams come true?

“Just go out there and do it.

If you can’t get started on your own, you’re never going to succeed — that’s the easiest part.

And there is no solution: Like, I can’t tell you to “go do this instead of that.”

You just got to go figure it out on your own.

If you can’t figure out how to start a company, you not going to learn how to grow a company, and growing a company is the hard part.

How to design smart marketing...

Austrade’s 4 reasons the economy will bounce back in 2022
October 11, 2021
The Australian Trade and Investment Commission has updated 7 charts...

What experts say to expect for Australia’s 2022 economic outlook
October 7, 2021
Treasurer Josh Frydenberg: "Australia’s economy is resilient and well‑positioned to...