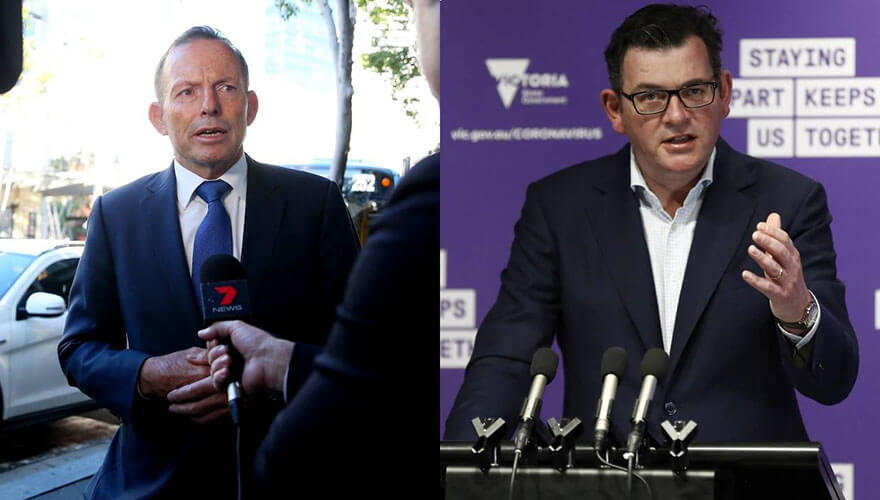 Former Australian Prime Minister Tony Abbott has slammed the “extraordinary ineptitude” of the Victorian government and how they’ve handled the coronavirus outbreak.

Abbott spoke at the Policy Exchange in London, which is a Conservative-leaning think tank chaired by former High Commissioner to the Alexander Downer.

It was here he gave his views on lockdowns that have taken over the world in response to the coronavirus pandemic.

Abbott also indicated that elderly COVID-19 patients should be allowed to die to reduce economic costs.

“And every death is sad, but that’s never stopped families sometimes electing to make elderly relatives as comfortable as possible as nature takes its course.”

He said governments had been approaching the pandemic like “trauma doctors” instead of thinking like “health economists trained to pose uncomfortable questions about a level of death we might have to live with”.

He said having served as Health Minister in the John Howard government, he “certainly envisaged” people wearing masks on public transport “but not for a moment did I ever contemplate ordering people to stay home.”

“The way I saw it, in any pandemic the focus would be to get people to stay at their posts … not to lock everything down lest disease spread.”

“People should get on with their lives even in the presence of death.”

Abbott believes that the lockdowns have lasted for too long and that the focus has shifted to preserving “almost every life at almost any cost”.

“Homes can be entered, people can be detained and the ordinary law of the land suspended and the premier now wants to extend this health dictatorship for at least another six months.”

“It’s amongst us. We can’t get rid of it,” he said, adding Australia had reached almost zero community transmission before the “extraordinary ineptitude of the Victorian government in the management of its hotel quarantine system produced what has been the biggest outbreak in Australia so far, responded to with the most severe lockdown tried in the world outside of Wuhan itself.”

He explained that lockdowns have created a “stop start economy and a stop start life”, saying that governments have created a climate of fear and have failed to ask the hard question about how much needs to be spent on saving lives.

“So far, with Sweden the most notable exception, governments have approached the pandemic like trauma doctors instead of thinking like health economists trained to pose uncomfortable questions about a level of deaths we might have to live with.”

He said officials have become “trapped in crisis mode, especially if the crisis adds to their authority or boosts their standing” and people were sick of being dictated to by “unaccountable experts.”

“My plea is for us to be very careful about further lockdowns because the consequences of lockdowns are enormous.”

This article originally appeared on Over60.