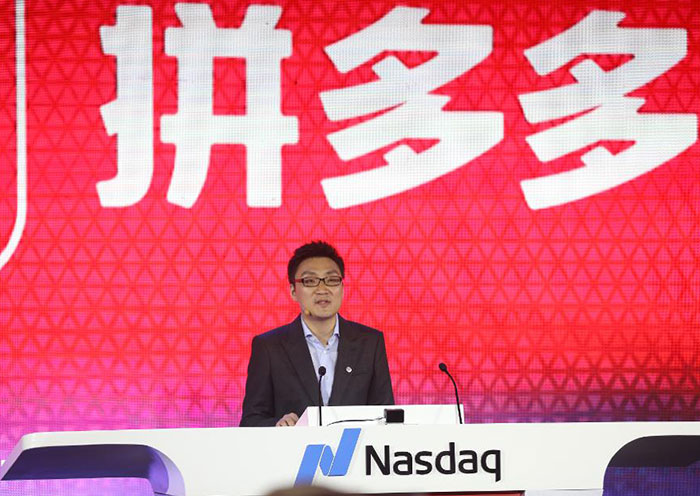 China’s third richest man is a relative new kid on the block — and one of the country’s youngest billionaire entrepreneurs. Colin Zheng Huang, age 40, founded online discount platform Pinduoduo in 2015 and took the e-commerce firm public on the Nasdaq in 2018. Following a 14.5% surge in share price on Friday that boosted Huang’s fortune by $4.5 billion, Huang is now worth $35.6 billion, according to Forbes — becoming the 25th richest person in the world.

In net worth terms, that puts him behind two giant Chinese internet titans: Tencent chairman Ma Huateng (worth $46.4 billion) and Alibaba cofounder Jack Ma (worth $41.3 billion), whose companies were started in 1998 and 1999, respectively.

Pinduoduo stock has rocketed up over the past two months amid growing demand for online shopping during the coronavirus pandemic. The company is known for pioneering social e-commerce in China: Shoppers can get lower prices if they can find others who will buy items with them as a group. The model was a hit, attracting 100 million monthly active users to its platform in its first year. Active buyers in the twelve months ending March 31, 2020 climbed to 628 million people, compared to 443 million a year ago, while the average spending per buyer increased 47% to $260, the company said in its quarterly earnings report on Friday morning.

However, investors seem bullish on Pinduoduo’s growth potential. The stock, which dropped to $31.77 per share on March 18 in the midst of the coronavirus-induced market crash, rebounded to close at a record of $68.70 per share on Friday. Huang, who owns a 45% stake in the firm, was the eighth richest person in China in mid-March, with a $16.5 billion net worth.

“Covid-19 has unleashed powerful forces that are changing the way we live, work and play. It has compressed the years of the behavioural change and accelerated the adoption of online commerce at an unprecedented pace,” Huang said in Friday’s earnings call. “Our mission has never been more relevant or salient in these challenging times, which is to provide a fun and engaging environment for people to shop together and get the best value for their money.”

The firm rolled out livestreaming features to all its merchants in January, making it easier for consumers to purchase products like high-end jewellery or live seafood, which buyers prefer to see in person. It also held livestreaming fairs in agricultural hubs during the coronavirus pandemic to highlight locally produced specialties; the firm says the March fairs resulted in 49 million orders as of April 30th. Pinduoduo plans to invest $7 billion (RMB 50 billion) over the next five years to develop infrastructure to help farmers sell their products online.

Pinduoduo’s growth comes at a time of renewed tension between China and the U.S. and concerns about U.S.-listed Chinese companies. On May 20, the U.S. Senate passed a bill that would allow the Securities and Exchange Commission to bar trading of any stock if the listed company’s auditing firm cannot be inspected by the Public Company Accounting Oversight Board for three consecutive years. Companies would also have to establish that they’re not owned or controlled by any foreign government. Though the new law applies to any firm on the U.S. stock exchanges, the move is largely seen as an aim at China, after Nasdaq-listed Luckin Coffee — a Chinese company — admitted to falsifying roughly $310 million of revenue in 2019. Its stock, which traded at over $50 per share in January, has moved to under $1.50 per share.

Pinduoduo founder Huang, a former Googler, holds a master’s degree in computer science from the University of Wisconsin at Madison. He interned at Microsoft as a student but decided to take a chance on Google instead after he graduated in 2004. “I didn’t choose to stay at Microsoft after graduation. Because first I could see what I would become at Microsoft ten years later,” Huang wrote in a 2016 blog post.

Huang started as a software engineer at the search engine giant, eventually becoming part of its initial China team when it expanded to the populous nation. He later struck out on his own, founding online game company Xinyoudi and e-commerce platform Ouku.com before making it big with Pinduoduo.