5 Airlines with the best new business-class offerings: and how to get them with air miles 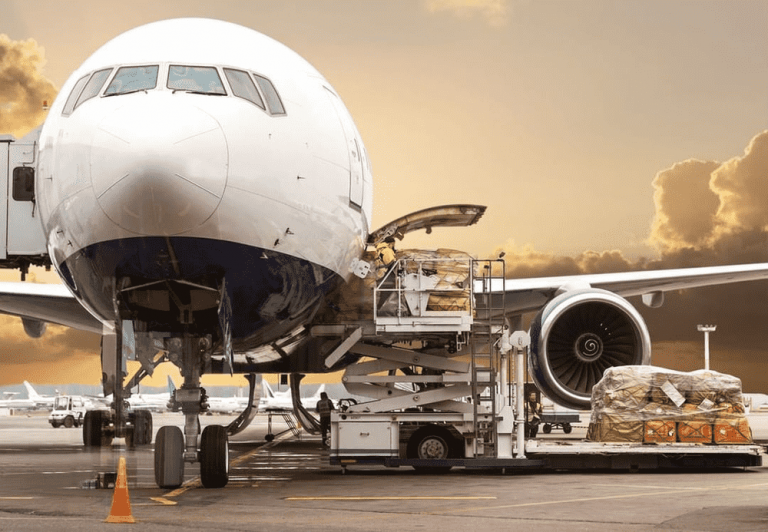 As ultra long-haul flights become the new norm, seats are also getting comfier – in business class, at least. From BA to Qantas and Delta to Turkish – these are the best and newest business class upgrades, and how to book them with air miles 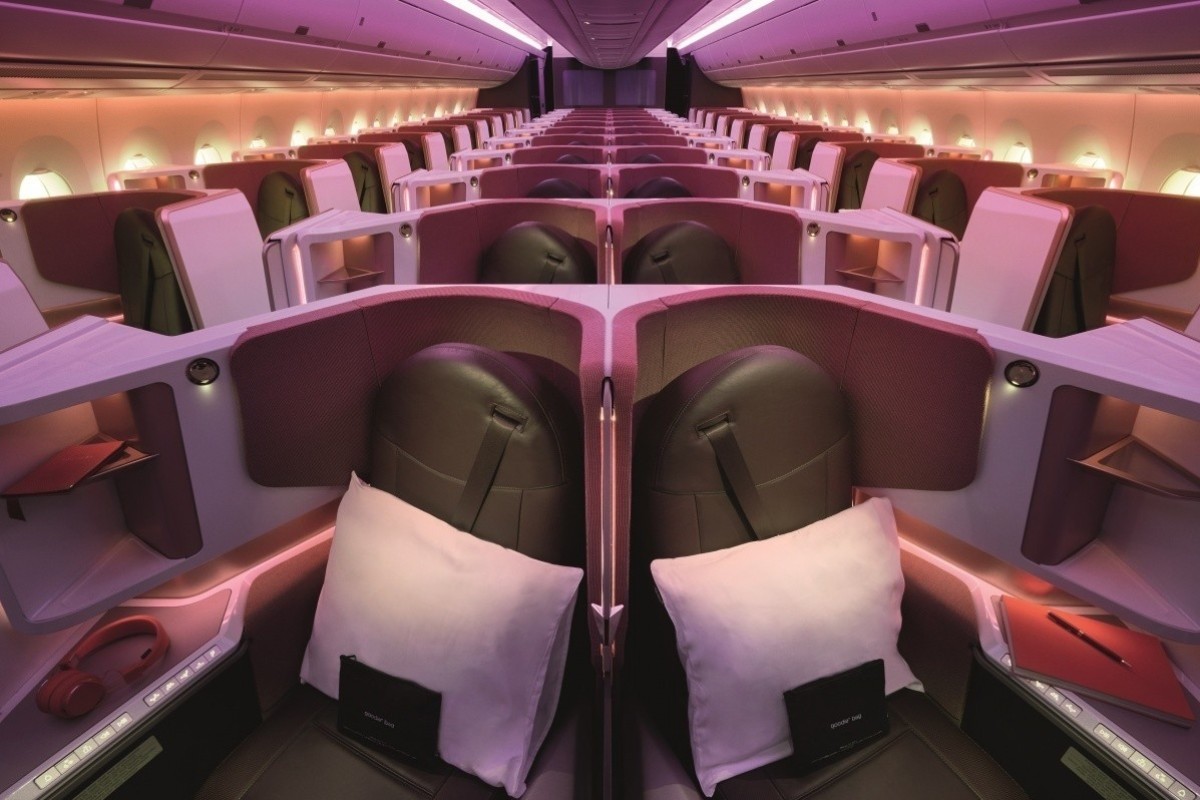 No matter where you’re going, business has never been better. A growing number of airlines have invested in more and better business class seats – or, in many cases, suites. The changes have been years in the making, but lucky for travellers, they’re hitting the market just as “ultra long-haul” flights get longer and more common.

In the past three years, Qatar Airways and Delta Air Lines raised the bar for in-flight exclusivity by adding closing doors to their lie-flat seats. Singapore Airlines and Qantas forged strategic partnerships with wellness experts to offer such perks as menus designed to combat jet lag or meditation classes in the lounge. And on several airlines, you can now control your in-flight entertainment screen with Bluetooth or apps on your mobile phone.

Here are five of the most exciting new business-class offerings to look out for – ranked for innovation and comfort – and two more not-new notables, plus how to book them with points and miles. Remember to always double-check your flight’s seat map before booking to determine whether your plane will have the latest and greatest cabin.

What can you eat in first class on Asia’s best airlines? 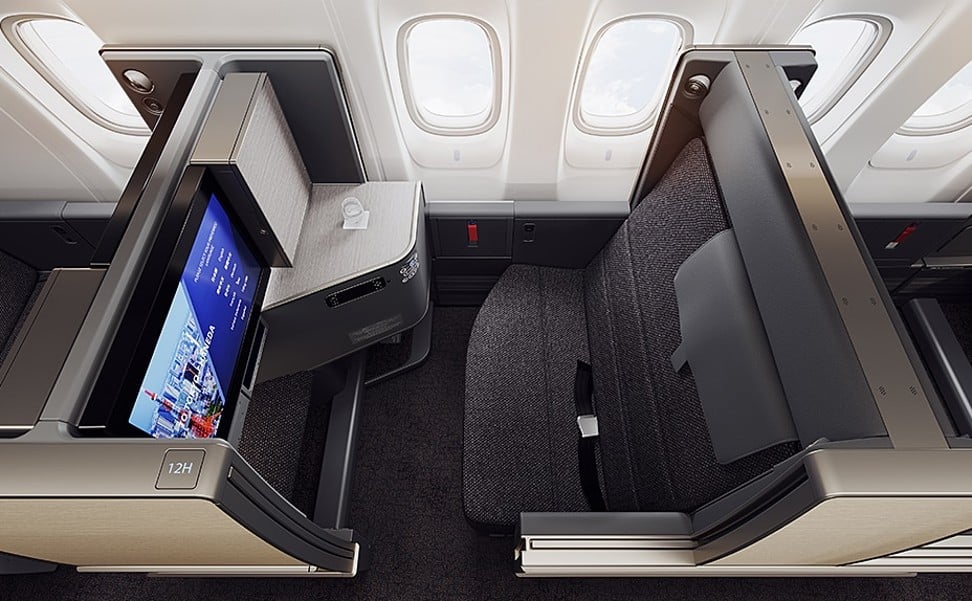 Formally titled The Room, the new suites are inspired by traditional multifunctional Japanese living spaces: they come with various wood-toned panels and double-wide, lie-flat seats topped by luxury Nishikawa Sangyo cushions. Sliding doors, like those on Qatar Airways’ Qsuites, make them especially private. Bonus: A mobile app allows you to turn your phone into a remote control, and there are plenty of outlets and USB ports to combat battery drain.

The new design is currently flying on 777-300ERs between Tokyo Haneda and London Heathrow; more routes with the same aircraft will be added in the coming months, including to New York and Frankfurt.

United MileagePlus, which is a transfer partner of Chase Ultimate Rewards, will charge you 75,000 miles each way between Japan and Europe, or 80,000 between the US and Japan. 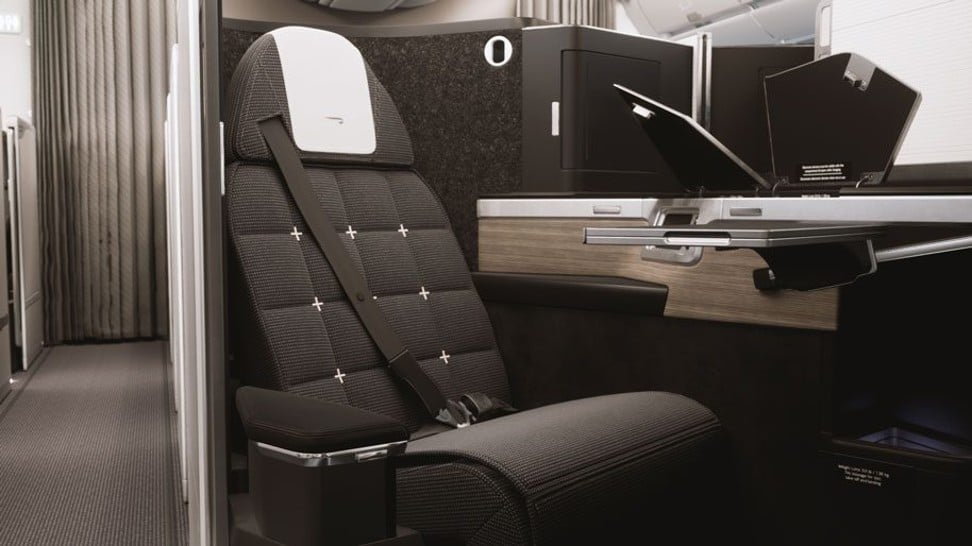 British Airways unveiled its new Club Suite in March, and it’s being installed on all 18 of the new A350-1000s in the fleet – along with some refitted Boeing 777s. Expect a look that’s reminiscent of Virgin Australia’s and American Airlines’ upper classes (they’re by the same manufacturer) but with slate-grey upholstery and a reverse herringbone layout. More importantly, these are suites, which means closable doors and privacy screens, as well as sumptuous down bedding from The White Company.

Compared to the airline’s old seats, these are far more spacious: Each is up to 70cm (27 inches) wide with the armrest lowered and reclines to a two-metre (79-inch) lie-flat bed, with extra large tray tables and 40 per cent more personal storage space. All that will take you from Heathrow to Dubai, New York, or Toronto, with Tel Aviv, Bangalore, Seattle, Chicago and Boston coming soon.

Book it with miles: This will depend on the route you’re trying to book. Flying between New York and London, you could redeem 57,500 American Airlines AAdvantage miles or 60,000 Alaska Airlines Mileage Plan miles each way. American Express Membership Rewards and Chase Ultimate Rewards points both transfer to British Airways’ Executive Club. You will need 50,000 to 60,000 Avios (BA miles) each way on this route. Taxes and surcharges can top US$600 each way, no matter which kind of miles you redeem.

What’s it like in business class on British Airways’ new A350? 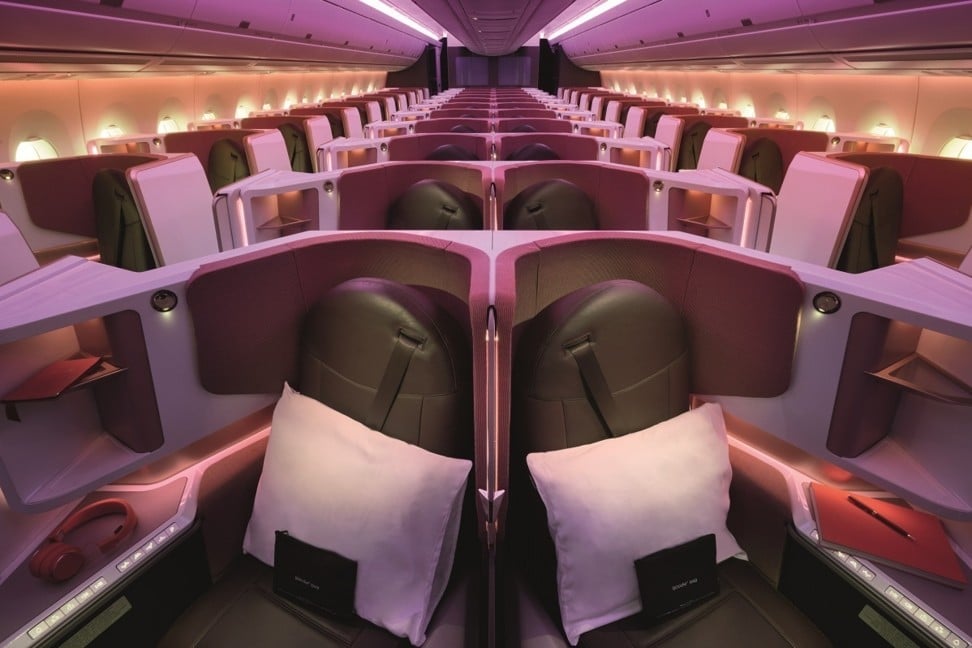 Virgin Atlantic’s new ‘Upper Class’ section is brighter than on the rest of the fleet, with splashes of purple and coral.
After dropping hints for months, Virgin Atlantic revealed it would be installing entirely new “Upper Class” seats aboard its order of 12 Airbus A350-1000s, which fly between London Heathrow and New York JFK.

The new seats have doors that slide about halfway shut for privacy and are arranged in a 1-2-1 pattern, with each seat angled slightly outward, toward the sides of the plane. The palette is also brighter than on the rest of Virgin’s fleet, with splashes of purple, coral, and an off-white cream lending the look some depth.

As for the specs that really matter: These seats are not the widest, at 50cm (20 inches), but they’re some of the longest, at up to 208cm (82 inches). Control the 47cm (18.5-inch) high-definition screen with your phone via Bluetooth or head to the Loft, a lounge-style twist on Virgin’s famous in-flight bar, where you can work (martini in hand) at a booth or a standing desk.

Book it with miles: You have two main options: You can spend 86,000 Delta SkyMiles each way, plus US$5.60 in airport taxes if departing the US, or around US$300 in the other direction. By contrast, Virgin Atlantic Flying Club requires just 47,500 miles each way, but with US$400 to US$700 in taxes and fees. The program is a transfer partner of American Express Membership Rewards (like Delta SkyMiles), as well as Chase Ultimate Rewards and Citi ThankYou Rewards. 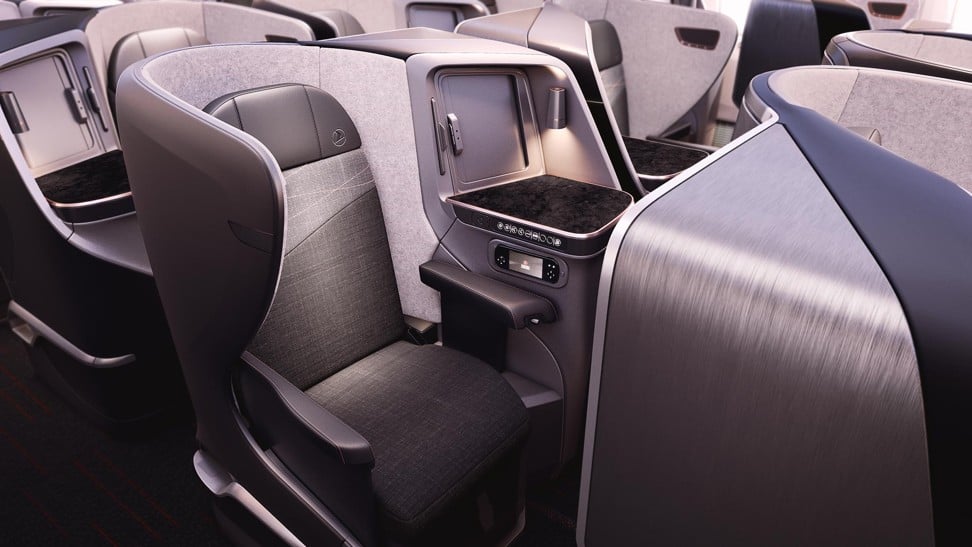 The seats in Turkish Airlines’ new business class offerings are no bigger than last time around.

Turkish Airlines began flying the first of its 25 Boeing 787-9 Dreamliners with its newest business class seats back in July, between Istanbul and Bali. That’s since expanded to include routes to the American cities Atlanta and Washington. By spring 2020, the carrier’s Airbus A350s will be upgraded, too, and additional routes will head to New York, London, Dubai and Los Angeles.

The cabin consists of 30 pod-like seats spread out in a 1-2-1 pattern, which is a far cry from the 2-2-2 and 2-3-2 arrangements previously on these planes. For the most privacy, opt for even-numbered rows; not every row has the same amount of space separating the seats, due to how they’re angled. Travelling with a companion? The odd-numbered rows may be better.

Despite all those major changes, the seats themselves are the same size as Turkish Airlines’ previous versions, at 56cm (22 inches) wide by 193cm (76 inches) long. Now, however, they are upholstered in noise-reducing Alcantara microfibre, feature do-not-disturb indicators, and have 46cm (18-inch) high-definition touchscreens.

Book it with miles: Thanks to Turkish’s participation in Star Alliance, you can turn to United MileagePlus or Air Canada Aeroplan miles for the best redemption values. Aeroplan charges 57,500 miles each way from the US to Turkey, while United requires 70,000 miles. If travelling on a round trip, you could also consider redeeming 88,000 ANA Mileage Club miles. 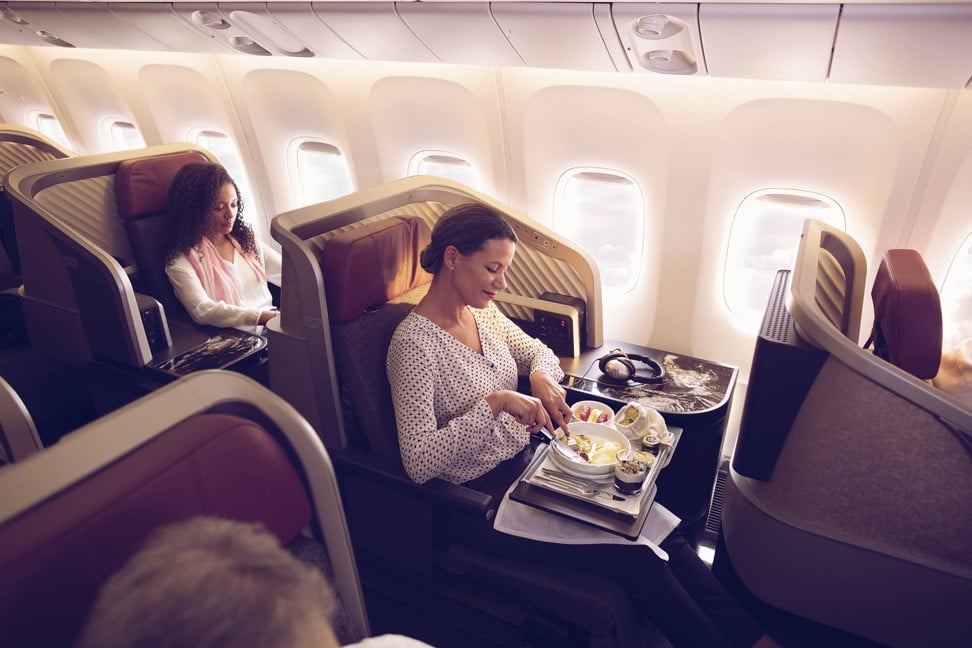 South America’s largest airline is currently in the process of updating its Boeing 777s and 767s with all-new business class seats to the tune of US$400 million. Future Boeing 787 and Airbus A350 orders will also get the new seats, but the airline’s previously delivered 787s and A350s will not.

Passengers on the right side of that coin will find customised versions of Thompson Aero’s Vantage XL seats similar to those found on such other airlines as Qantas, SAS and South African Airways. They’re 58cm to 61cm wide (23 to 24 inches) recline to two-metre (79-inch) beds that flight attendants will dress with temperature-regulating mattress pads and full-size pillows. Among the sophisticated style upgrades are textured backboards, granite worktops and 46cm (18-inch) high definition monitors.

Good luck booking them, though. So far, just five aircraft have the new seats – and they’re not scheduled regularly on any specific routes – so you’ll have to earn your bragging rights by digging around and checking seat maps. We’ve recently spotted the upgraded 777s on routes from São Paulo to Madrid and Miami.

Book it with miles: Latam is a member of Oneworld – at least for now. A recent US$2.25 billion deal with Delta means this is sure to change eventually. Until then, use American Airlines AAdvantage miles to book awards on the airline. It’ll cost 57,500 miles each way between the US and Brazil, or 87,500 between Brazil and Europe.

Not so new, but notable 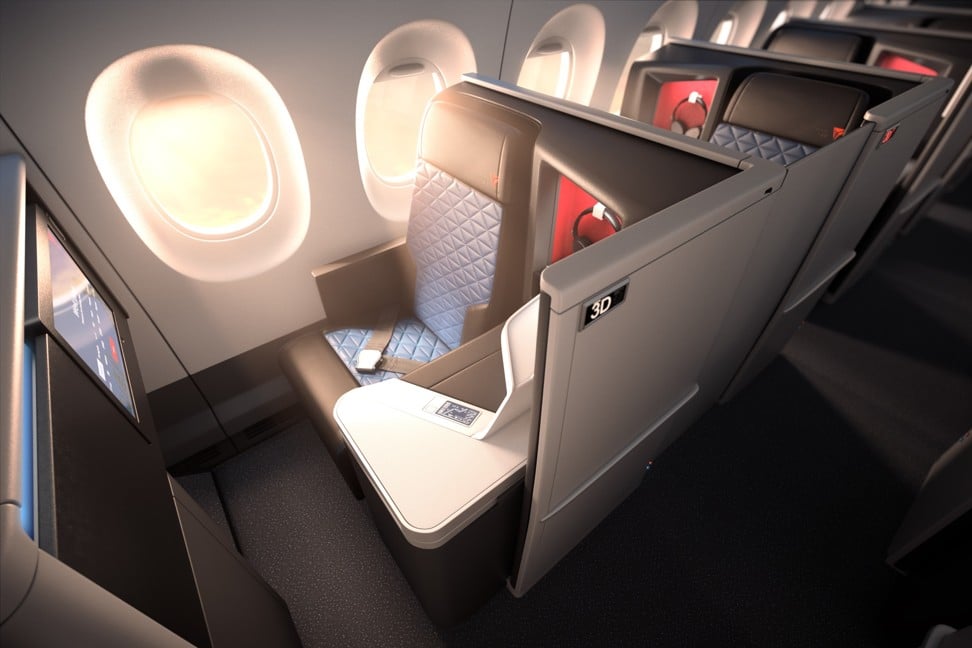 Delta’s business class seats are hard to nab – but we have some tips.

Delta’s suites are some of the hottest tickets in the sky, and their continued roll-out is making them easier to find. Now, in addition to the fleet’s A350s and Boeing 777s, you’ll find them on new A330-900neos, which fly from Seattle to Seoul, Shanghai, and Tokyo Narita (starting on October 27).

Book it with miles: The airline has been pricing award tickets for Delta One Suites at exorbitant levels – we’ve seen redemptions as high as 360,000 miles. It’s more affordable to use Virgin Atlantic Flying Club miles – a transfer partner of American Express Membership Rewards, Chase Ultimate Rewards, and Citi ThankYou Rewards – which charges just 60,000 miles each way.

Which 5 airports are so good you’ll never want to leave?

Qantas also has been updating its Airbus A380 superjumbos with its latest business class design, now officially installed on its Boeing 787-9s and A330s. These planes and subsequent refits will be deployed all around the network, rather than on specific routes, touching down in Singapore, London and various US gateways. Just focus eagle eyes on that trusty seat map.

Book it with miles: Your best bets are to redeem either 55,000 Alaska Mileage Plan miles or 80,000 American AAdvantage miles each way between the US and Australia.